Hitting the heights on an African balloon safari 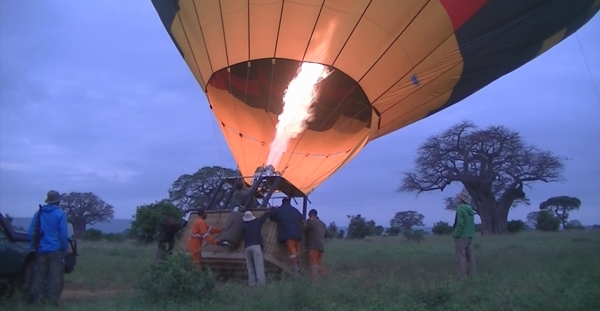 Ever wondered what its like to do a balloon safari in Africa? Robert was in Tanzania recently and went flying over Tarangire National Park.

I was woken at 5.30am by one of the Masai guards knocking gently on my tent. Fifteen minutes later, having been escorted by the same guard to the restaurant, I was standing on its terrace drinking fresh brewed coffee and taking to our pilot. Called Nihat, he had over 3,000 flight hours under his belt and spoke perfect English.

“I’ve been flying in Tarangire for over 2 years,” he informed me as he swigged syrupy coffee from a mug. “During that whole time I’ve never had to cancel a flight. The weather here is always excellent.”

Our land cruiser pulled up and we climbed in, leaving the camp as the first hint of dawn touched the eastern sky. It was a short drive, initially on a rough track before cutting off through the savannah to the launch site. The crew had arrived before us. The basket was in place, lying on its side with the burners and fuel all stowed and secured. The balloon was laid out flat on the grass and as we got out of our vehicle a large fan started blowing the first hot air into it. It rolled around, making it ripple like water in a bowl. Two crew pulled on a rope tied to the top of the balloon, keeping it taut.

Once the balloon was semi-inflated the burners started blasting into it and within minutes it was trying to lift itself into the sky, the two men on the rope now joined by a third as they fought to keep it down. On a signal from Nihat they released the rope and the balloon swung into the air, gently pulling the basket upright as it fought to get away. It was not yet inflated enough to lift from the ground, even if the basket hadn’t been anchored to a land cruiser.

We climbed into the basket. In a central section stood Nihat, surrounded in gas bottles and with the controlling ropes hanging in front of him. Either side the basket was dived into two sections, each with a low bench. Nihat gave a long burn, the heat strong on my head through the hat I was wearing. Slowly we rose off the ground and hung for a few moments on the anchor rope as final checks were done. When he was happy, Nihat released the rope and we rose into the African sky.

It was surprising how quickly we left the ground behind. It was so gentle it felt as if nothing was moving and yet the World shrank in size and dropped away below us. When we got to 500 metres we levelled off, the whole of Africa seemingly stretching away in all directions. Lake Manyara was to the west, its white bed catching the gentle light of dawn. To its south was Lake Eyasi while to the north was Mt. Meru and Kilimanjaro.

Tarangire was spread beneath us like an enormous pop-up map, the river that gives the Park its name meandering through its heart.

“We’ve come up to find the breezes,” Nihat explained. “Different altitudes have winds that blow in different directions, its useful to know if I wan to move the balloon.” He nodded to the right. “Here there is a breeze from the East. I can use it if we need to get closer to some animals.”

We slowly descended as we approached the river, almost skimming the treetops as we dropped into its bed so that the steep-sided banks stood higher than we floated. Birds flew around us, their dawn chorus clearly audible  and a herd of impala stood together watching as we passed, their tails twitching nervously. Nihat gave a long burn, the heat hot on my skin in the cool of morning, and after a few seconds the balloon responded and carried us over the approaching Baobabs and above an acacia forest.

A family of elephants turned to face us, their trunks lifted as they tried to smell what was approaching. With one shrill trumpet, the matriarch told them to follow and she head off at a brisk pace into the undergrowth, her companions following in a line with the youngest in the middle. A couple of outlying members trumpeted in alarm, receiving an answering call to guide them in the right direction as we drifted overhead and away. My last sight of them was of them turning to face us once more, shaking their heads and returning to their grazing.

A herd of buffalo, maybe 150 strong, didn’t flinch as we passed overhead, oblivious to their silent watchers. A silver-backed jackal, jogged past and a family of hyenas sat warming themselves in the early-morning sun. Giraffes stood watching with idle curiosity while different types of antelope grazed unperturbed.

In a blink of the eye an hour had passed. Nihal had been looking for a landing spot, his spotters on the balloon radioing the back-up crew when a suitable place was spotted. We rose up, making use of that easterly breeze we’ed discovered earlier, before slowly drifting down to land in a spot I’d have thought it impossible to land in. When we were a few metres above the ground we all sat on the small benches in our sections of the balloon, holding rope ties oppositeand heads lowered. There was a gentle bump and the basket settled. We were down. 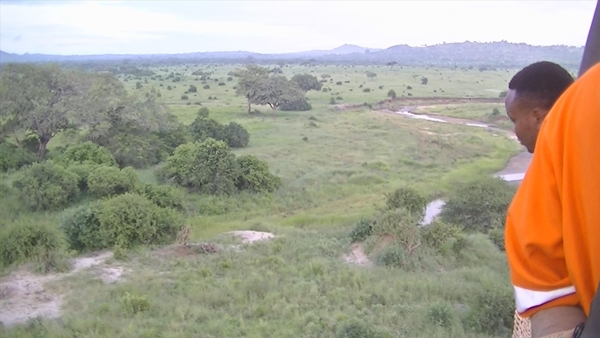 “You can sit up now,” Nihat instructed us and we stood as the crew rushed around with small blankets, throwing them over any prickly bushes that might snag the balloon as it deflated. The support vehicle arrived and we clambered out, about to be whisked away to a champagne breakfast. After the exhilaration of the flight, even that was going to be a bit flat.

Robert stayed at Tarangire Balloon Camp, where the balloon safaris are based and operated by Adventures Aloft.