The new BBC1 series The Hunt, narrated by Sir David Attenborough looks at predation in the natural world.  Viewers are transported at 9pm on a Sunday evening to a range of wonderful locations around the world to witness real-life dramas unfolding before their eyes.

Executive Producer Alastair Fothergill writes on the BBC website, “the kill itself isn’t interesting, because once animals have killed, the story’s over. What is interesting is the build up, the strategies adopted by both the predators and prey. This has never been looked at in detail, and that is the aim of The Hunt”.

At the Conde Nast Luxury Travel Fair, where we exhibited in November, we were lucky enough to enjoy a talk in the Expert Theatre and meet BBC wildlife cameraman Doug Allan, who worked on Blue Planet, Planet Earth and Frozen Planet, also produced by Alastair Fothergill. Doug told us that it takes on average 450 days of filming to get enough footage for a one hour episode. Taking such stats into account the team here at Real Africa has even more reverence for the BBC’s latest sensational wildlife series.

Catch the next episode of The Hunt, Nowhere to Hide, on BBC 1 on Sunday at 9pm. The episode follows cheetahs, bald eagles and lions on their hunt for prey in the exposed plains landscape with much of the 60 minutes filmed in Africa.

So where are the best places in Africa to see some of The Hunt’s leading ladies?

Cheetahs are diurnal, hunting in the morning and afternoon, and can be seen perched on termite mounds, rock kopjes and even on safari vehicles on occasion in order to survey the horizon – they can see prey 5km away and accelerate from 0 to 64kmh in just three strides. The Hunt filmed cheetahs in Kenya’s Masai Mara – we would recommend the Mara or the Serengeti to see these beautiful cats in action.

Leopards are more tricky to see being nocturnal and relying on ambush. They need to get within 4m of their prey to be successful. Leopards are most often spotted draped in umbrella acacias in East Africa or on night drives when their eyes shine brightly. Zambia’s South Luangwa is a fantastic place to see leopard as is Sabi Sands in South Africa’s Kruger.

Lionesses …well, put it this way, I don’t know of anyone who hasn’t seen a lion/lioness in the Masai Mara. The Marsh Pride were made famous by the BBC Big Cat Diary series and can still be observed hunting in the Mara along with many other prides. The Hunt filmed specific lion behaviour, as they stalked zebra in Namibia, in Etosha, another excellent place to see them, especially during the peak of the dry season in September and October when game congregates around waterholes. When it comes to lions, you have a great choice, from Kenya and Tanzania, or the lions of Duba Plains, Botswana to the prolific Luwi Lions of Zambia’s South Luangwa, or Cecil’s offspring in Hwange National Park, Zimbabwe.  You can even see them in trees in Tanzania’s Lake Manyara National Park and Uganda’s QE National Park.

Nile Crocs– Get to the Grumeti River in the Northern Serengeti between July and September and you will see plenty of giant Nile Crocodiles feasting on wildebeest as they make the crossing from one side to the other enroute to Kenya’s Masai Mara. Murchison Falls in Uganda is another great place to observe these beasts.

Ethiopian Wolves– With only around 500 of these long-legged fox-like creatures remaining in the highlands of Ethiopia, you have to be lucky to get a glimpse. Give yourself every chance by staying in the Bale Mountains at the wonderful Bale Mountain Lodge.

Wild Dogs-The formidable wild dog or painted dog thrives in packs of around 6 to 20 dogs, roaming open plains and woodland. Wild dogs are also endangered but the Linyanti region is Botswana has very  reliable sightings with several packs denning in the area. Another good place to try and see Wild Dogs is in Zambia’s South Luangwa – but, as I well know, the dogs move very quickly, with incredible stamina, and can be elusive so it doesn’t always work out. I spent a week trying to see them in Zambia – saw their prints, heard them, glimpsed them but never quite managed to catch up with them! The positive news is that in the last ten years the wild dog numbers in the valley have increased. By the way…I saw everything else when I was there, from lions chasing impala into jeeps and leopards sheltering from the rain in thorn bushes…

Watching wildlife is of course, unpredictable so although we can’t guarantee you’ll witness a sequence like the cheetah taking a wildebeest calf during your safari holiday,  we can ensure we use our expert knowledge, experience and wonderful guides to get you to the best places at the best times for what you want to experience.

Here are our Top Five recommendations for places to catch some serious safari action.

The Serengeti promises a special safari whenever you go, with the wildebeest migration making its circular journey year-round . However, the southern plains of the Serengeti play host to calving season during January and February and is said to be the best place in the world to observe cheetah hunting. 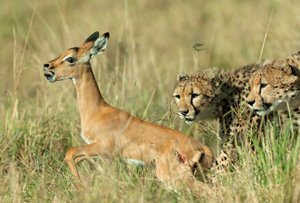 During a dramatic 3 week window, starting in late January depending on the arrival of the rains, the wildebeest have their calves with thousands being born daily, long legged and unsteady as they take their first steps on the short grassy plains of the Serengeti, their nursery.

During these key few months, this area of the southern Serengeti and western Ngorongoro Conservation Area is home to Africa’s densest concentration of predators. The big cats patrol the  grassland waiting for an opportunity to strike. Cheetah sightings are especially good along with large prides of lion while other predators like hyena and caracal can also be seen.

If you are keen to witness stalking behaviours then heading to the area around Ndutu in February would be our number one recommendation – many would say that this is the absolute best time to be in the Serengeti.

Mobile camps come into their own, moving to be within reach of the migration and offering an authentic ‘Out of Africa’ safari experience. Our favourites include Alex Walker’s Serian Serengeti South, Lemala Ndutu Tented Camp and &Beyond’s Serengeti Under Canvas. Mobile camps are seasonal tented camps which move depending on the location of the herds.

If you prefer a permanent camp then we would recommend Ndutu Safari Lodge,  Lake Masek Camp and Sanctuary’s Kusini Camp but there are several lodges and camps in this area so do ask!

The Masai Mara is synonymous with big cats. The Marsh Pride came to life on our screens during the BBC Big Cat Diaries – you can even stay, like the BBC film crew did, at Governors Camps in the Mara, well placed for visiting the Marsh Pride.  Several big cat projects are based in the Mara including the Mara Predator Project, the Mara-Meru Cheetah Project as well as a Spotted Hyena research centre so this is a indication that the area is rich with wildlife.

Research in the 1990s by Joseph Oguto showed that there were roughly 3 lions per 10 square kilometres in the Mara, the largest pride of 48 being the Talek Pride. It is true that lion numbers have dropped by around a third  in the last twenty years, as they have all over Africa but the Masai Mara is still one of the very best places to see these beautiful big cats. 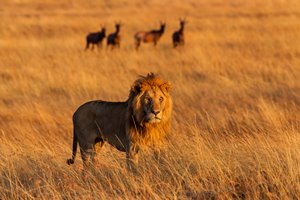 Visit the Mara between July and October when the Great Wildebeest Migration is in the vicinity and chances are you may see something very special. We recommend staying in one of the private concessions as opposed to within the National Reserve itself. The main reserve has many lodges, often quite large ones, and as such can see high vehicle densities at peak times. In the private conessions which work in partnership with the local Maasai communities, visitor numbers are restricted to 1 guest to around 350 acres allowing for a more exclusive experience.

You’ll find lovely small lodges, classy mobile tented camps like Saruni Wild and Alex Walker’s Serian as well as affordable riverside camps like Karen Blixen Tented Camp on the Mara River, one of our favourite ‘good value’ tented camps in the Mara North concession, which bridges the gap between the tiny, top end  lodges/camps and the larger 3 star lodges/camps in the national park.

For  observing predators and their prey the Masai Mara is a fabulous place to safari.

The best time to be in Etosha for wildlife is in the peak of the dry season when vast numbers migrate to waterholes (August – October). As the dry season progresses the landscape becomes increasingly arid and by October, the hottest month, can be quite dusty. It is at this time that the BBC film crew captured the incredible footage of lions hunting – with the swirling dust storm confusing their prey and masking their scent. 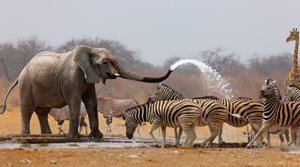 Many of our clients choose to explore Namibia on a self-drive itinerary over 16 or so days with a 4×4. You can also explore with a flying safari.

You may be interested in our blog, Namibia – In the Driving Seat.

Self Drive of Namibia

Duba Plains in Botswana is famous for its clashes between lions and buffalo in particular. The special thing about the Duba lions is that they hunt during the day allowing visitors to witness them at work rather than simply lazing in the shade. Many will remember the film made by the Jouberts about the lions of Duba and it is a stay at the Joubert’s camp, Duba Plains, with just six ensuite tents that will get you close to the lions here.

When the film was made there was one big pride, the Tsaro pride but in the last few years this pride has split into two so interactions in the area are transforming all the time and are rather unpredictable. However Duba Plains is still rated one of the best places to see lions hunting. 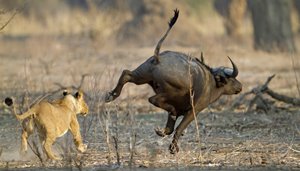 Safari elsewhere in Botswana and I don’t think you will be disappointed. Linyanti is a good choice for seeing predators with the guiding teams focused on finding lion, leopard and cheetah – night drives are possible from Lebala Camp which sits in a private concession and wild dogs den in the area. Lebala is on the plains/marsh and combines well with sister camp, Lagoon, which sits on the banks of the Kwando river.

If Botswana is of interest to you, you may enjoy our country guide called Botswana – Wilderness & Wildlife.

South Luangwa is a fantastic place to see predators. The Luwi Sand River, close to Nsolo Bush Camp  is where several lion pride territories overlap, while leopard use the dry river bed a bit like a super highway. South Luangwa is one of the few National Park’s allowing night drives with trackers and spot lights which gives you a good chance to see leopards actively hunting. 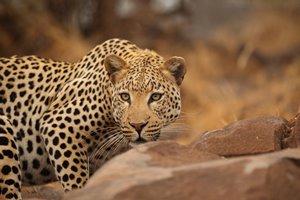 This area is very unspoilt with few vehicle tracks in the area and much of the exploration done on foot with guided walking safaris. Accommodation is in seasonal bush camps which are erected for the duration of the dry season between May and October time. This means minimal disturbance to the environment and as a result wildlife is prolific. For lion, leopard, spotted hyena and wild dog (if you are lucky!) this area is truly fabulous.

Tell us what you are keen to try and see and we will be able to give you independent advice on the best time of year, the best guides and the best lodges/camps to visit in order to realise your specific ambition. You can call us on 01603 283 517.