The Serengeti is the largest and most famous of Tanzania's National Parks and a must-visit on any safari holiday to Tanzania. It covers an area of over 14,760 square kilometres and is situated across the Kenyan border from the Masai Mara. Its landscape is the exact image of people's expectations of African safari; grassland stretching as far as the eye can see, occasional acacia trees jutting into the sky and large stone boulders or kopjes breaking the skyline.

It is home to a wonderful array of flora and fauna from large prides of lion, leopard and cheetah, to herds of elephant, Masai giraffe and a whole world of grazing animals. On one of our private Tanzania safaris, you will get to see the African landscapes and animals at their most beautiful and evocative.

It is however one thing in particular that makes the Serengeti particularly famous. Every year it plays host, along with the neighbouring Masai Mara, to the wildebeest migration. This spectacle of over 1,000,000 wildebeest migrating in search of fresh grazing is the largest animal migration on the planet. First they move northwards, returning south after the rains have started. As they go, their hooves throw up a huge cloud of red dust, something that has come to symbolise the park. Pursued by lions and attacked by hungry crocodiles as they attempt to cross the Mara River, it is nature at its most raw and exciting; a unique safari experience.

The Great Migration
The first thing to understand is that the migration is made up of many different herds - it is not just one super herd. These herds are all different sizes moving at different paces. Some of these catch up with herds in front of them, or slow down being joined by those behind - they form vast columns of animals - wildebeest, zebra, antelope - all moving in search of fresh grazing from the southern Serengeti to the Masai Mara in Kenya before returning again to calve.

The movement of the wildebeest depends largely on when the rain arrives, and this of course varies from year to year. As a general rule you can expect to see the migration on the Serengeti's southern plains and on the edges of the Ngorongoro Conservation Area between January and March time.

During these first few months of the year the wildebeest are grazing on the nutrient rich short grass following the rains in November. This is also when the wildebeest calve - virtually all of them in a 3 week window from late January to early February. It's quite a spectacle. We recommend lodges around the Ndutu area in the first three months, including the Serian Mobile, Ndutu Lodge, Sanctuary Kusini and Lake Masek Tented Camp.

By March the plains have started to dry out and food is depleted so the herds start to move north and west.

During April and into May, the long rains give new life to the Serengeti. Lush shoots across the plains draw the wildebeest northwards from Lake Masek to the central Serengeti around Lake Magadi and Seronera. Pioneer Camp, the Sopa Serengeti and Lemala Ewanjan are camps/lodges in this area, among others, with the Serena and Mbuzi Mawe slightly further to the north and well-positioned for the unpredictable 'moving month' of June.

During June and July, lodges in the central area are accustomed to arranging picnic lunches so guests can spend all day out on the plains maximising their viewing time. The herd tends to stretch out across the Central and Western zones of the Serengeti. Many clients choose to combine several different camps to be sure of catching up with the herds during these unpredictable moving months. The position of the herds greatly depends on the rains and the condition of the grass.

The wildebeest can start to track west as early as May, picking up the pace all the time, to Grumeti and the Western Corridor of the Serengeti, bunching up in vast noisy herds before some make the dramatic river crossings at the Grumeti River throughout July and into August en route to the plains of Kenya's Masai Mara. The Kirawira is in this area, as is Mbalageti Lodge, both Serena properties and a cluster of wonderful luxurious camps and lodges run by Singita. By August and September the wildebeest are usually located in the extreme north zone of the Serengeti and are also present in great numbers in the Masai Mara crossing the Mara and Talek Rivers. However, the herds arrival in the north and Masai Mara depends very much on the weather and the grass - if it is very dry and parched the herds can arrive early; if there is plenty of food, the herds are delayed, spending longer in the central and western zones.

We have many camps in prime positions in the northern zone including Sayari Camp, Singita Mara River, Serian Serengeti and Lemala Kuria Hills (Northern Serengeti) and then in the Masai Mara's Mara Triangle area and Mara North there is the trio of Governors Camps, Serian Camps, Karen Blixen Camp - an endless choice! You can search our safari lodges in the Lodge Library.

The Mara River in the northern part of the Serengeti is the greatest hurdle for the wildebeest - a vast and rushing river populated by hungry crocodiles - a far more challenging prospect than the Grumeti River which consists of many small channels. This is the spectacle many visitors want to see and so it is no surprise that lodges in the area near the river throughout July, August and September are booked to full capacity. It is essential to book as early as possible if you are keen to be in the Serengeti/Masai Mara at this time.

During September and into October, the wildebeest who have made it, start to spread out to graze the plains of the Mara before starting to journey south again as early as September for the lead groups and as late as the end of October for those lagging behind. The herds stay close to the eastern edge of the Serengeti. They accelerate their progress through November, another unpredictable month, and December in order to reach the southern plains of the Serengeti in January once more to feast again on the short grass and have their calves.

We post Wildebeest Migration updates on our News feed and social media channels and keep in regular touch with teams on the ground so we are able to advise our clients accurately.


Do not be fooled into thinking that the Serengeti is a one-trick destination. Far from it. Surrounded by the Ngorongoro Conservation Area, as well as the Ikorongo and Maswa reserves, the Serengeti is part of a huge area of protected land through which animals can migrate and pass unmolested.

Also, because of its size, the Serengeti covers several different eco-systems, each with its own unique combination of animals and plant-types. For example, at the centre of the park is Seronera, to the west the Grumeti River, while the south offers more remote and untouched game-viewing.

The Serengeti is one of the most iconic destinations in Africa. Seeing a herd of Masai giraffe, one of the best places to see giraffe in great numbers, against a Serengeti sunset is an unforgettable and magical experience and will have you smitten with wild, untamed Africa forever. 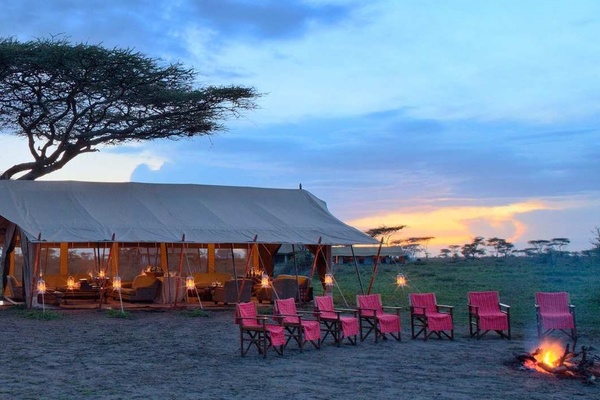 This luxury fly-in safari combines the Ngorongoro Crater and the world famous Serengeti.

This classic Northern Circuit safari combines the Ngorongoro Crater and the Northern Serengeti.