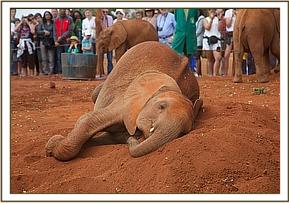 It hardly seems possible that it is nearly a year since I first met Kithaka at the David Sheldrick Wildlife Trust nursery unit in Nairobi National Park. Although showing signs of being a mischievous young bull elephant from the start, he was still very small and vulnerable and coming to terms with the loss of his elephant family.

It has been heart-warming to see him form bonds with his keepers and the other elephants this past year and to witness the extraordinary care and commitment of all the staff at the DSWT.

Kithaka is certainly far bigger and more boisterous today and a bit of a handful by all accounts. He increasingly enjoys his independence, typical of a young bull elephant, and wanders off into the bush to explore. He has now been moved from his stable to the stockade with newcomer, baby Kauro, moving into his place. 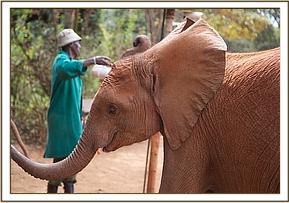 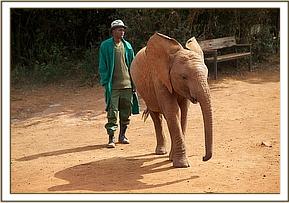 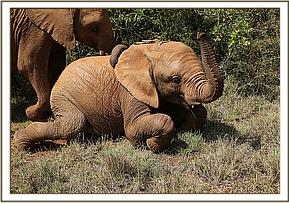 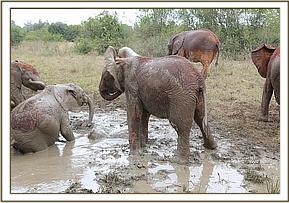 The stockade houses a number of ‘big’ elephants as they move on from the dependent infant stage. The keepers’ sleep nearby rather than in with them as in the stable. Then from the age of around two to three years, elephant orphans who are physically and psychologically stable will transfer to the Ithumba or Voi units in Tsavo East National Park to continue the rehabilitation process back to the wild. We are looking forward to hearing about Kithaka’s progress in the coming months.

During 2014 the DSWT has received 23 elephant orphans.

Kithaka still enjoys a good wrestle in the mud with his fellow orphans. He continues to be the naughty boy of the nursery, stealing milk, pushing small children during visiting time, surprising film crews by hiding in the bushes and then running out trumpeting, and most recently, harassing Maxwell the rhino. Here is an entry from the keepers’ diary:

“The orphans had a very amusing morning as once all the big elephants were let out of their stockades, Kithaka, Barsilinga and Lemoyian decided to pay Maxwell a visit. Maxwell was fast asleep lying along the gate to his stockade so he didn’t notice the three elephants approaching and very secretly feasting on his lucerne. The lucerne was a real treat to the elephants and their mission was to eat as much as they could get before Maxwell woke up. Once they had their fill, Kithaka and Lemoyian began pushing the gate and pulling sleeping Maxwell’s ears with their trunks. At first it seemed that Maxwell quite enjoyed all this attention as he was moving his head around to get the best angle to get a tickle from the two babies. However, it didn’t take long until Max was out of his sleepy mood and was quite annoyed with the three menaces. He head butted the gate making the three elephants run away trumpeting with happiness as they joined the herd in the forest for yet another beautiful day. “