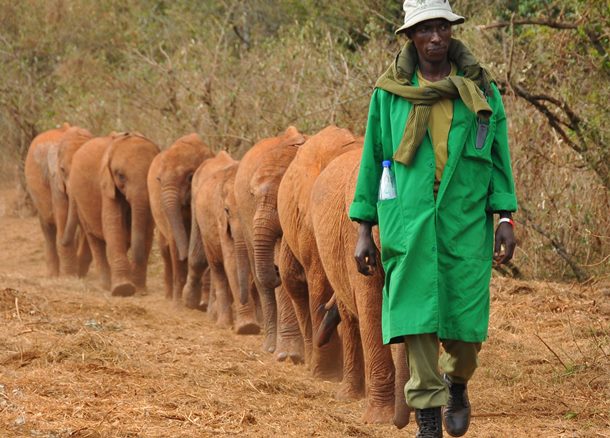 The DSWT runs the most successful orphan-elephant rescue and rehabilitation programme in the world. The nursery unit, pictured above, is based in Nairobi National Park, Kenya and it was here that I first met Kithaka, the elephant Real Africa adopted back in November 2013. Kithaka continues to thrive and will soon be moving from the Nairobi National Park nursery unit to Ithumba, ready to be rehabilitated back to the wild. When we first met Kithaka he was so small and vulnerable that it is hard to believe he is about to move to the Ithumba unit, as a strong young bull elephant, and this is all testament to the work of the Sheldrick Trust. We eagerly await his progress. In the knowledge that Kithaka is about to move on to the next stage, we felt the time was right to adopt another elephant – a calf just starting their journey in the nursery unit. So, in the New Year we adopted Arruba.You can read Arruba’s story below. 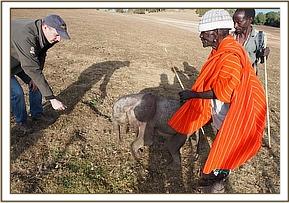 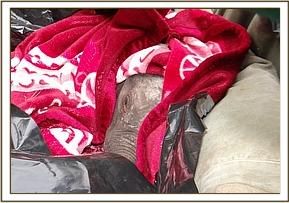 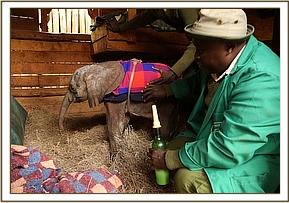 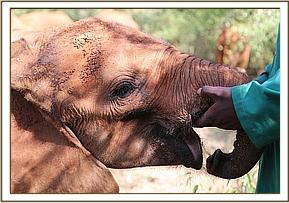 In recent months, with poaching escalating once again in East Africa, the Sheldrick Trust has been called on to rescue many tiny distressed elephants. Without their help, these calves would have perished. We recently heard of a tiny newborn calf, Ndotto, who was rescued at just 2 days old from the Ndoto Mountains in Kenya’s far north. Ndotto was found very confused in a throng of sheep and goats.  Ndotto is now being looked after in the nursery. You can see three pictures of the rescue mission to the left. Even on New Year’s day the team were in action attempting to help an emaciated calf found trapped in a gulley in Laikipia – sadly help came too late and on this occasion, the calf did not survive for more than a few days. However the Sheldrick Trust successfully rescued three babies in January.  A tiny calf was rescued from the Sera Conservancy, Northern Kenya on January 3rd. Hamsini struggled with a terrible septic wound on his back caused from a torrid time while being trapped in a well. He also suffered terrible bruising from the fall, and a lung infection. It has been a tricky month for Hamsini but we are hopeful with the right care that he will start to put on weight and his condition improve ; another calf of around 15 months, name Boromoko (pictured bottom right) was rescued from the plains of the Masai Mara on January 5th and has settled in the nursery well, being exceedingly loving; and then, on the 26th, yet another orphan was rescued close to Narok, a heavily populated area.  Her name is Siangiki which means young girl in Masai.  She came in a collapsed state but thankfully the Trust has managed to retrieve her from the brink and she is now safely out with the others and beautifully settled. Often it is not clear how the calves came to be separated from their mothers. 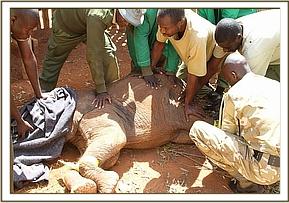 On Tuesday 28th May 2013 a young female elephant calf was sighted by the Kenyan Wildlife Service maintenance team who were erecting a new electric fence in the Aruba Dam area of Tsavo East National Park. The elephant calf was reported to be desperate, and quite evidently alone. Due to the new fence, the baby was trapped and confused.

The period the calf had been trapped within the fenced area was unknown, as is the fate of the calf’s mother and the rest of its herd. It is suspected that the calf and it’s mother might have strayed into the new fenced area and the mother somehow lost the calf on exiting the enclosure and was unable to find her way back in to retrieve her baby. Another possibility is that the calf is an ivory-orphan, as eight elephants were brutally poached in nearby Ndara.

The David Sheldrick Wildlife Trust’s Voi Stockades in Tsavo East were alerted. The head Keeper of the Voi Stockades contacted the DSWT Nairobi HQ that afternoon to make the arrangements for a rescue plane from Nairobi to come the following morning, as darkness was already setting in. 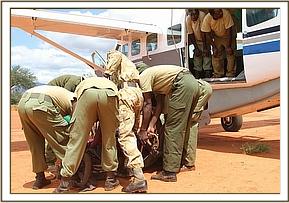 So the new calf, who was estimated to be approximately 8 months old, put up a huge fight when the Voi Keepers arrived at the scene, with Arruba escaping their attempts at rescuing her and reacting extremely aggressively to their presence. Yet the Keepers eventually succeeded in capturing her and loaded her into the waiting vehicle to be transported back to the Voi Stockades.
On arrival at the Voi Stockades, the calf began to settle down and thankfully drank, having arrived in a very dehydrated state. There had been no access to water within the fenced area where she was found. Apart from a few bruises and minor abrasions the calf was in good condition.

The presence of the other orphans at the Voi Stockades was a huge comfort to the new arrival who desperately needed love and reassurance. Shimba, who is recovering remarkably from lion attack injuries, was a great help in getting the calf settled down, stretching his trunk through the stockade fence to offer affection and encouragement and reassurance. 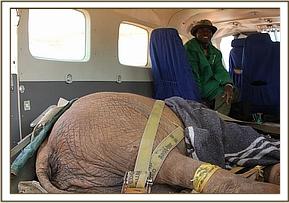 In Nairobi on the morning of the 29th, the Nairobi team and plane were ready to depart on their mission having been briefed the previous evening. Three of the Nairobi Keepers set off to Nairobi’s domestic airport at 9am to catch the rescue plane to Voi in Tsavo East where the Voi Keepers were preparing the calf for her plane journey to Kenya’s capital city.

After a smooth flight with clear views of Mount Kilimanjaro, the Chyulu Hills and the great expanse of Tsavo, the plane landed on Voi’s airstrip, which is located only a few kilometres from the Voi Stockades. On arrival at the stockades it was obvious that the orphan was going to be a handful to re-capture as she was still wild and fearful. Those who were still present to keep a careful eye on the new baby included some of Voi’s big ex-orphans including Emily, Lolokwe and Icholta. 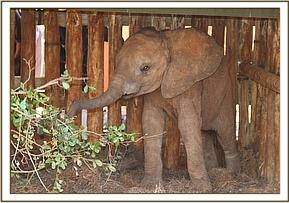 The entire stockade’s workforce and the Nairobi Keepers were all needed to help to get the new arrival restrained and on the ground in order to brace her legs and keep her safe and secure during the flight. With all hands on deck the calf showed huge amounts of strength in managing to evade being taken down, yet after a few minutes she succumbed to the keepers, whilst ex-orphan Emily bellowed and stomped around the stockades concerned about what was happening to her.
The calf was quite a weight and again all hands were needed to lift her into the waiting vehicle and to get her to the airstrip. The transfer went smoothly and within half an hour the calf was being lifted into the plane, strapped securely inside with an IV drip administered to ensure she stayed hydrated during the flight, and a mild sedation to keep her calm.

Saying farewell to all of the Voi staff the Nairobi Keepers climbed into the plane alongside the calf, keeping her reassured and making sure she was as comfortable as possible during the journey. The orphan gave into exhaustion during the flight and fell into a peaceful sleep, awoken when the plane arrived back in Nairobi.

A DSWT vehicle was waiting at the airstrip and the calf was soon on her way to the DSWT Nairobi Nursery in Nairobi National Park. At 2.30pm she had finally reached her final destination and was carried into her stockade. After untying her, the Nairobi Keepers carefully lifted off the blanket covering her face, which was keeping her quiet and calm, and helped her up. Unsteady on her feet she stood, rather dazed, in the shade of her stockade eyeing the humans surrounding her warily yet being too tired to fight them off, she seemed to know she was in a safe place with caring people to look after her.
This calf was lucky to have been found alive and well as the area in which she was sighted is a favourite place for the infamous Tsavo lions. 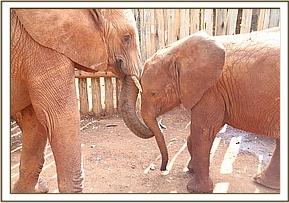 It took Arruba a good few days to calm down and feed on milk, and once she trusted the Keepers enough to follow them she was let out of the confines of her stockade to join the Nursery orphans. By this time she knew them as they had been brought to her stockade for every feed time in an effort to coax her into drinking the milk formula that she seemed so reluctant to take.

Once out with the others elephant communication worked its magic yet again, and it was as if she knew the ropes from the outset – even venturing to the public viewing between 11 -12 with the others, seemingly unperturbed, a far cry from the frightened calf that only a week before was brought to the safety of the Voi stockades.

You can find out more about the DSWT here.

Many clients travelling with Real Africa to Kenya elect to stopover in Karen, a leafy suburb of Nairobi, for a night to enable them to visit the DSWT nursery unit in person. If this is of interest then please do let us know. There are two viewings, a public 1 hour viewing at lunchtime daily, and a private visit daily at 5pm, for those wishing to adopt an elephant.