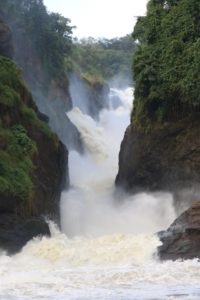 Many visitors to Uganda travel through the south of the country. They visit Queen Elizabeth National Park for safari and Kibale National Park to see chimpanzees. The highlight of their trip is Bwindi Impenetrable Forest in the very south-west of the country and a trek into the park in search of Mountain Gorillas. They are often surprised how lush and scenic the country is and finish their trip with a night or two on the shores of Lake Victoria.

If you can spend a few more nights in the country then a stay at Murchison Falls National Park is another highlight that really shouldn’t be missed. Its a wonderful Park, its northern area packed with big game. Its a unique experience to watch them grazing as the waters of the Nile flow past in the background. Within the park lies Murchison Falls, from which the reserve takes its name.

They were first discovered by the Western world by Samuel & Florence Speke in 1863-4 and named after the then President of the Royal Geographical Society Roderick Speke. They were renamed by Idi Amin to Kabalega Falls in the 1970’s although this name is little used these days. 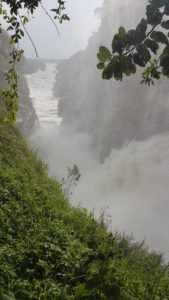 At the Falls, water from Lakr Kyoga, itself having come from Lake Victoria is forced through a gap in the rock only 7 metres wide. It falls 43 metres and an estimated 300 cubic metres of water of the Victoria Nile per second is forced through this small gap. The noise is deafening and the spray will soak you if the wind is in the wrong direction.

Oil was recently discovered in the western areas of the park and the Government, with financial backing and expertise provided by China, have built large new roads through the reserve to facilitate its extraction.

This included a large spur road to the Falls themselves which the Government maintain is to help facilitate tourism. The size of the road – the width would allow a motorway by UK standards once surfaced has let many to believe that the plans to establish a Hydro-electric plant above the falls, a plan rejected in 2019, is far from dead.

If it happens, it will change the Falls forever. If you want to go, and you should, go soon.