Slinging mud and hiding in the bushes – it’s all in a day’s work for mischievous elephant orphan, Kithaka 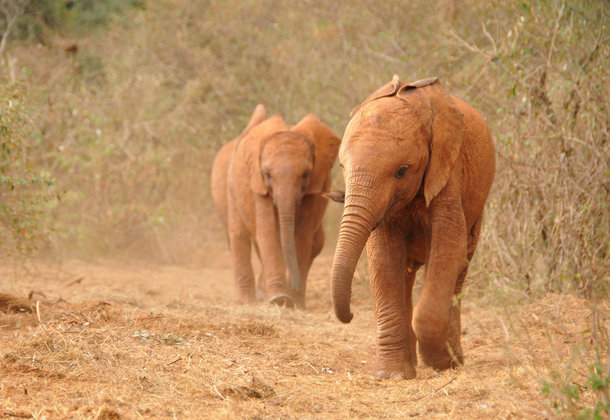 Kithaka, pictured, is a boisterous young elephant. He likes nothing more than a game of football, a roll in the mud and a bit of a wrestle with fellow playmates Lemoyian and Ngasha. Trumpeting, bush bashing, hiding and mud slinging are all part of the fun. Seeing this spirited calf now,  it’s hard to believe that at a week-old Kithaka was found alone and vulnerable wandering around a village in the Imenti Forest area, having lost his mother following a stampede.Without the love and care of the Sheldrick Trust, Kithaka may not have made it.

The Sheldrick Wildlife Trust was founded in 1977. It remains a pioneering conservation project, devoted to the rescue, rehabilitation and release of orphaned elephant and rhino. The Orphans’ Project, one of the projects supported by the Real Africa Trust, exists to offer hope for the future of Kenya’s threatened elephant and rhino populations as they struggle against the threat of poaching for their ivory and horn, and the loss of habitat due to human population pressures and conflict, deforestation and drought. In all,  the Trust has hand-raised 150 calves to date. On my most recent visit to Kenya in November I visited the Elephant Nursery.

To see quite so many orphans at the Trust – a total of 38 when I was there, was a real shock to me. With poaching escalating in Kenya, the Trust is expecting this number to rise. To spend time with the orphans was a real privilege; I was able to walk around the nursery at leisure, observing and interacting with the babies, speaking to their keepers and marvelling at their devotion.

Kithaka lost his mother when he was just 1 week old. The trust is not sure how,  but it is widely believed that there was a stampede at which time he was separated from his mother after she and her herd were chased out of an area of human settlement near the Ruiri outpost in the lower Imenti Forest.  Week-old Kithaka was found wandering around alone in a nearby village. His name Kithaka, is the Meru word for Forest. 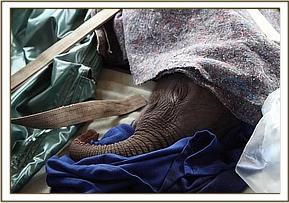 The journey to the Sheldrick Trust 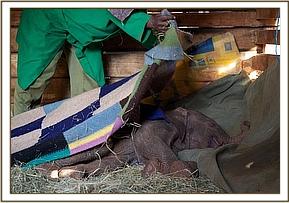 Kithaka’s first night at the Trust

The Real Africa Trust has adopted Kithaka, and donates to the Sheldrick Trust on behalf of every client who books with Real Africa. When I was visiting the nursery, he rested his trunk on top of the stable door to attract my attention (it worked!) and then when he had my attention continued to sniff me and search to see if I had any treats on me. I put my hand on the stable door and he held it very gently with his trunk. In the office I chatted with the project manager, Edwin, telling him that Real Africa would like to foster Kithaka. He just looked at me and smiled, “the naughty boy?” he said.

I get regular updates on Kithaka’s progress. He continues to do well.  I gather that his latest mischievous exploits include taunting a camera crew who were at the Trust to film the orphans as they left their night quarters at dawn. Kithaka hid in the bushes to alarm the crew and generally caused havoc as only Kithaka can.