Most people go to Southern and Eastern Africa for the wildlife and scenery but actually it is a fantastic destination for those looking for a bit of history. After all Africa is the cradle of civilisation and the place were mankind was first discovered. There are many fantastic sites where you can see evidence of ancient times; from rock art to ruined cities, from fossilised remains to ancient living tribes there is something for everyone even remotely interested in Africa’s epic and important history. 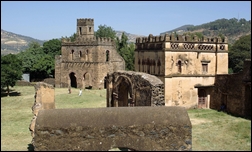 Ethiopia is one of the most historically and religiously significant places in the world with an exciting past that is still very much evident today. Those who visit Ethiopia are stunned by the vast number of holy sites which have amazingly survived pretty much intact. If you wish to visit the most important historic sites of Ethiopia then you should definitely include Lalibela, perhaps the most famous of them all. This site is home to 12 monolithic or rock-hewn churches including the Church of St George. How they managed to carve these churches from underground and the rock face itself back in the 13th century is just mind boggling.

In Axum (Aksum), an ancient capital of Ethiopia and home to the Kings, you can find the basilic Church of our Lady Mary of Zion. This is believed to be the home of the Ark of the Covenant that Moses carried with him during the Great Exodus. No one is allowed access to it for fear of the dire biblical warnings associated with the Ark so many religious scholars doubt that the Ark is really there. There is plenty more to explore in Axum as there are many stelae or obelisks dating back 1700 years and historic royal palaces; a relic of the time when Axum was the capital of Ethiopia (from 400BC – 1000AD).

Also worth a visit is Gondar which was once the ancient capital city of both the Ethiopian Empire and the later Begemder Province. Gondar is home to many important remains including several royal castles, including Fasilides’ castle, Iyasu’s palace, Dawit’s Hall, a banqueting hall, stables, Empress Mentewab’s castle, a chancellery, library and three churches. Near the city lie Fasilides’ Bath, home to an annual ceremony where it is blessed and then opened for bathing; the Qusquam complex, built by Empress Mentewab; the eighteenth century Ras Mikael Sehul’s Palace and the Debre Berhan Selassie Church.

South Africa is an incredibly rich source of cave paintings and one of the best areas to see many of them in in Kwazulu Natal in the stunningly beautiful Drakensberg Mountains. The area is now protected as a Unesco World Heritage Site. The San people (also known as Bushman) created beautiful rock paintings and engravings which you can see all around this area. There are over 40,000 of them in this area alone so they were pretty prolific! There are various walking tours that take you to sites that are close together and these trails usually have an information centre where you can learn more about them or hire a guide to show you around. We have a great range of beautiful accommodation in the Drakensberg Mountains including Cathedral  Peak and Cleopatra Mountain Farmhouse and some great South Africa self drive tours that pass through the Drakensberg. 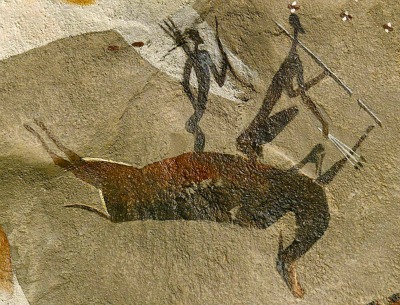 The Kamberg San Rock Art Trail is incredible and includes such sites as the Game Pass Shelter.  The San paintings are now national monuments protected by law but were first discovered back in the early 1900s.  At first they were thought to be simple depictions of daily life such as hunting but nowadays experts believe that the artwork is actually made up of mystical images that were seen by shamans whilst in a trance.  Among the most accessible of the many Drakensberg rock art sites is the open-air Bushman Cave Museum in the Giant’s Castle Reserve, established in 1903 and run by KwaZulu-Natal Nature Conservation. A short walk takes you to the cave, which features 500 rock paintings, some of which are estimated to be around 800 years old. However if you are a fit and adventurous hiker you can take yourself off to more remote trails where you will be able to discover caves on your own!

Olduvai Gorge in Tanzania is actually one of the most important paleo-anthropological sites in the whole world and you can visit it on one of our Tanzania safari holidays.  You can visit en route to the Ngorongoro Crater. This site was part of a scientific discovery that rocked the scientific world.  It allowed scientists to date early mankind for the first time as it was here that remains were found from millions of years ago. Olduvai turned out to have been occupied by Homo Habilis 1.9 million years ago,  Paranthropus Boisei 1.8 million years ago, and Homo Erectus 1.2 million years ago.  Modern mankind known as Homo Sapiens is dated to have occupied the site 17,000 years ago.

Louis and Mary Leakey were the paleo-archaeologists responsible for most of the excavations and discoveries of fossils in Olduvai Gorge and their family have since continued their work and even today scientists are still continuing to discover important finds in the area. The Leakeys were firm believers in Darwin’s theory of evolution and were sure that early man had lived in the area. They followed other scientists finds but it was their discovery of a homonid skull that meant Tanzania was truly the origin of mankind. In 1959, Mary found remains of the robust australopithecine Zinjanthropus boisei (now known as Paranthropus boisei) which has been one of the major scientific discoveries of all time. This is because the age of the skeleton was put at  1.75 million years and this dramatically changed what had been the previously estimated time scale of human evolution.

The Great Zimbabwe ruins are the largest collection of ruins in Africa south of the Sahara such as Libya, Egypt and Morocco. Located in Zimbabwe between the Zambezi and Limpopo Rivers, the ruins are remains of an ancient culture of great wealth and impressive architectural skills. Built between the 11th and 15th centuries, Great Zimbabwe was home to a cattle-herding people who also became adept at metal-working. The ruins are the largest of their kind on the Zimbabwe Plateau, but they are by no means unique. There are lots of much smaller sites across Zimbabwe and as far as Mozambique. Great Zimbabwe is impressive as it was once home to up to 20, 000 people in its heyday. The remains are made up of granite walls – embellished with turrets, towers, platforms and elegantly sculpted stairways which show a huge amount of skill and expertise in architecture and engineering for such an early civilisation. Although the site was ransacked by European explorers and treasure hunters it is still an incredible place to visit and well worth a visit. It can be combined with a tour of Southern Africa or a safari in Zimbabwe. So important are the ruins to the nation that the country actually took its name from the Shona word for ruins, ” Zimbabwe”.

You may have noticed on our Tanzania itineraries many references to the Leakeys and Olduvai Gorge and wondered who they were and why they are famous.

Louis Leakey was a British anthropologist and naturalist who lived and worked in East Africa in the early half of the 20th century and whose work was vitally important in establishing human evolutionary development in Africa. Louis Leakey also played a major role in creating organizations for future research in Africa and for protecting wildlife there, working with both Diane Fossey and Jane Goodall.

Leakey was born to missionary parents and spent his childhood in Kenya learning about local wildlife and customs whilst living with the Kikuyu tribes. On return to England he went to university in Cambridge where he then took an interest in early history and mankind and decided to specialise in both anthropology and archaeology. He was sent to Tanzania to assist on the famous dinosaur dig at Tendaguru. On graduation he was such a respected figure that Cambridge sent him back to East Africa to study prehistoric African humans. He excavated dozens of sites, undertaking for the first time a systematic study of the artifacts.

He became involved with the site at Olduvai Gorge in Tanzania where early human remains had already been discovered by Professor Reck. As the rock bed was 600,000 years old so too must be the fossilised bones of early man discovered there. This discovery caused a huge upset amongst the general public as mankind was believed to have arrived much, much later, and Reck was discredited as few were prepared to believe him. Leakey then took over the dig when the Germans ceded the territory to the British at the end of the war.

Louis and his second wife Mary spent most of the 1950s excavating at Olduvai Gorge and found many fossils and early tools. In 1959 the OH5 (also known as the Nutcracker Man) skull was unearthed by Mary.  Louis also believed that it was of a species ancestral to modern humans that he eventually dubbed Zinjanthropus boisei (East Africa man). Zinj is an ancient Arabic word for the East African coast; anthropus refers to the fossil’s humanlike characteristics; and boisei refers to Charles Boise, who had been making financial contributions to the Leakeys’ work since 1948.

Louis initially believed Zinj to be a direct ancestor of modern humans (which he published in the National Geographic) and the maker of those tools found near its remains, but he withdrew this idea once he and Mary unearthed Homo habilis which had a larger brain in the same area less than two years later. Despite that, OH 5 made the Leakeys famous and brought more attention to the developing field of paleanthropology.

Later on two young geophysicists dated the rock bed and therefore the hominid fossils in the Olduvai Gorge to 1.75 million years. A truly stunning discovery that meant that Zinj was far older than anyone had ever imagined.  Louis Leakey had proved Charles Darwin’s theory right with concrete evidence – a major scientific breakthrough.