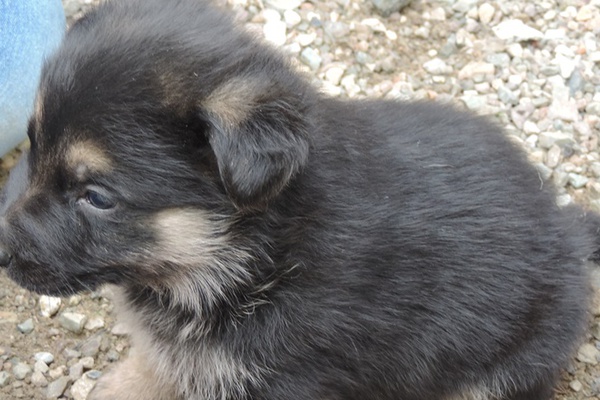 We have been enthusiastic supporters of anti-poaching dog units for some time now. So far we have funded ten specialist anti-poaching dogs, with four of these deployed to important black rhino breeding areas in Zimbabwe (Vaala), Botswana (Savas and Primaa) and Kenya (Drum) and trained by our UK partner Animals saving Animals.

ASA train and deploy highly specialised dogs to anti-poaching units. The addition of these canine units has made a huge impact and is a vital tool in the battle against the poachers. At Ol Pejeta in Kenya only one rhino has been poached in two years and at Mkomazi in Tanzania there have been no poaching incidents in the seven months since the dogs caught the last bush meat poaching gang.

ASA currently has 20 operational dogs providing operational support to four countries in Africa protecting elephant, rhino and lion. One dog has the ability in favourable conditions to secure a wildlife habitat of up to 32km2 with the search capabilities of up to 60 rangers covering the same ground over the same time.Due to their superior senses dogs can track at night, they can exert 240psi of bite pressure and chase a target at 32km per hour. They cannot be corrupted or bribed and will work seven days a week providing they have 8 hours rest and the correct level of care.

We are incredibly proud to support the dog squads and we are committed to facilitating further relationships and working to help secure more wildlife areas, not limited to Africa,  with these fabulous dogs.

“One well-trained dog can cover as much ground in a night as eight officers, making it much harder for wildlife criminals to evade detection. There is no escaping these dogs.”

The breeds of dogs favoured for this highly specialised work are Belgian Malinois - Malinois are intelligent, loyal, agile, sturdy and equally skilled at tracking, detecting, guarding and apprehending. ASA also work with bloodhounds and Spaniels who are utilised specifically for tracking.

From Pups to Protectors

Specialist training starts at 3 months after the pups have been assessed for suitability. Not every dog is right for this role. Extensive raining is conducted by Daryll Pleasants, founder of ASA, and his team. Visits to The Big Cat Sanctuary and local zoos help to acclimatise the dogs to the sights and sounds of Africa, while taking to the skies in helicopters is another essential element of their training. Once they are deployed to Africa Daryll conducts further training with the dogs and their new handlers including work on both handling and tracking. These visits are repeated, with ongoing support provided. The dogs need safe kennels and runs as well as equipment to keep them safe,  from leads and harnesses to body armour and goggles. They need high protein food, veterinary care and each dog also has a GPS tracker in case they should become separated from their handler. Handlers also need to be equipped.

To find out more about the work of ASA and the regions they work in please read on:

In southern Africa ASA work with ICORP, an independent South Africa- based anti poaching group that are making a huge difference with a very dangerous but crucial role. ICORP is a small dedicated group with very little equipment.

In 2016/17 Real Africa committed to pay for Stage 1 funding of an anti-poaching dog.

Stage one costs £6,500 per dog and covers purchase of puppy, inoculations, food and training for one year consisting of foundation training in search, tracking and bite work.

Rob and family went to visit the new recruit, Vaala,  during their holiday in Italy, meeting the pup at just a few weeks old. We have all been glued to her progress ever since and are delighted to report that having made her journey safely from Rome to Harare in Zimbabwe she is now working as an operational anti-poaching dog in Save Valley.

You can help support the anti-poaching dog squad by buying a Tshirt or sponsoring an operational dog - find out more here.

If you're interested in the work of the dog squad you may like to read our blog when Sara went on a tracking exercise at Lewa in Kenya with Tipper the bloodhound. Real Africa clients can do similar in either Lewa or Ol Pejeta conservancy in Kenya, where we have recently donated a tracking Spaniel dog to their canine unit.

The average life expectancy of a rhino that wanders from the Kruger into Mozambique is currently 12-24 hours.

The area where they need most assistance is Crocuta anti-poaching unit which is ICORP's APU primary arm, operating on 10,000 hectors situated 20 km south of Massingir, wedged into the larger Lebombo Conservancy in Mozambique which borders the Kruger National Park. There are no rhino on the reserve, but they stop poaching gangs using this area as a springboard into the Kruger National Park, where they are slaughtering rhino and elephant.

They also act as a buffer and stopper group, arresting poachers coming back with horn, or going to kill and sometimes they will wait overnight to move during the midday, or late night. Poachers are also maiming animals on the reserve with snare lines, and using dogs and machetes to kill wildlife. Firearms are stashed and hidden along with horn/ivory and ivory after the incident. There are numerous confrontations with armed gangs, with shots fired. They've had Rangers stabbed, and shot. Recently one poacher died in a fire fight outside the reserve with the complete syndicate arrested, $15,000 cash recovered and a vehicle and firearm seized.

Animals Saving Animals role, and Explorers Against Extinction's, is to help them with the dogs, direct associated equipment and handler training.  The dogs will help in three areas of concern this being.

1. Deterrent-To act as a deter to poachers heading into the Kruger being used in a border control role, Dogs have a pick up and indication range of about 1km in favourable conditions and should be needed can then apprehend.

2. Firearms detection- all our dogs are trained to search and locate hidden forearms and associated items. With the sudden upsurge in poachers not wanting to be caught in possession of the firearm the new trend in poaching is to lay the weapon in hiding several days before the operational night. The dogs are having huge successes in locating these weapons

3. Reactive role- after an incident the dogs can locate a shooting spot then track up to 48 hours cold a poacher scent or spore to give us an arrest or at the very least's vital intelligence about routes, how many men, transport etc

The Save Valley, Zimbabwe

Animal Saving Animals second ongoing project is 'Save Valley' Zimbabwe. This is  a 3,000 km reserve housing one of only 8 viable breeding populations in the world (about 160 rhino & 2000 elephant). They currently have two dogs 'Rogue' & 'Polaris' who have completed stage one training and are now about to start operational/deployment training. They will be joined by Explorers Against Extinction's Vaala.

This is a front line unit with continuous poaching attempts, the most recent being when four poachers were caught, and rifles and associated items seized. On further investigation one of the rifles captured was linked to a shooting in Harare of a woman and eight other rhino deaths.

Poachers fear the dog squads and therefore use darkness to enter reserves when they know they cannot operate due to the danger from being ambushed or attacked by wild animals. Obviously the dog's noses work just as well at night and it is much cooler for them to work. We are working on equiping the handlers with night-vision goggles and the armed rangers with thermal-imaging sights to allow night patrols and gain the upper hand. It would be a big deterant as the poachers would them know they are at a disadvantage 24 hours a day.

"I would like to thank everybody involved with the Explorers against Extinction campaign and all the artists and supporters who donated to the Sketch for Survival exhibition. Being invited to speak at the Explorers night at the Royal Geographical Society was an amazing platform for us. To share that stage with Sir Ranulph Fiennes was an honour. Over the four months of the campaign we also received a huge amount of exposure, with articles in several magazines, newspapers such as the Daily Mail and invitations to county shows and travel exhibitions. Many thanks."

We continue to work closely with Daryll and ASA, believing whole heartedly that getting these specialist dogs units into conservancies is a real deterrent to poaching. Our 2017 Explorers Against Extinction campaign funded a new tracking spaniel, Drum,  for Ol Pejeta Conservancy in Kenya and a new dog squad, the first of its kind, in Botswana.

In Spring 2017 Sara contacted Map Ives at Rhino Conservation Botswana and introduced the idea of rhino protection dogs to him. Explorers Against Extinction (then known as the Real Africa Trust) offered to fund the purchase, stage 1 training, equipment and deployment for a team of two triple role dogs through their Explorers Against Extinction campaign. Savas and Primaa were trained and deployed by  ASA. RCB has been terrifically enthusiastic about the introduction of dogs to help protect rhinos in Botswana and we hope this is the start of a fantastic relationship.

"Next summer, two highly trained rhino protection dogs will join our monitoring teams and the government’s Anti-Poaching Unit on special patrols. They will be the first K9 (canine) team to work as ‘rhino guardians’ in Botswana. The dogs and their specialist training were kindly donated by the Real Africa Trust and Animals Saving Animals. We know that the creation of a specialist RCB Dog Squad will make it much harder for wildlife criminals to evade detection. There is no escaping the nose!"