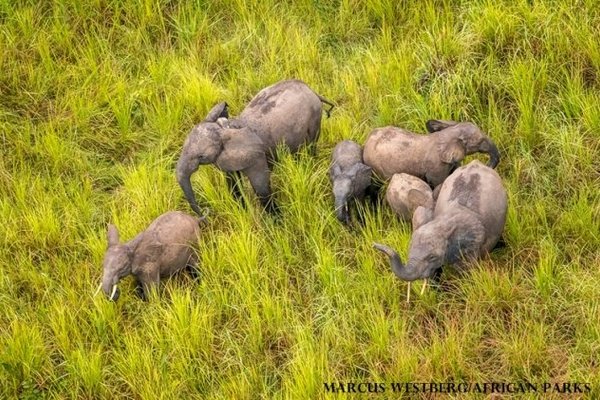 Explorers Against Extinction  partnered with conservation non-profit African Parks in 2018, in order to assist with the introduction of a new working dogs programme in Garamba National Park. Garamba is a critical wilderness situated in north-eastern Democratic Republic of Congo that is managed by African Parks in partnership with the DRC Government’s Institut Congolais pour la Conservation de la Nature (ICCN). It is also one of Africa’s oldest and most biologically significant parks.

Specialist dog units have proved hugely effective in the prevention of wildlife crime. Garamba is on the frontline of the poaching crisis - in the 1970s, there were estimated to be as many as 22,000 elephants in the park; today there are fewer than 1,300. The park is also home to 47 critically endangered Kordofan giraffe - the last remaining of the entire species in the DRC. Since assuming management of the park in 2005, African Parks has overhauled its law enforcement, outfitting and training rangers, working with communities and implementing extensive programmes to meet the threat of poaching. The introduction of this canine unit will help protect the wildlife and offer support to the dedicated and courageous rangers who put their lives on the line every day.

Four additional anti-poaching dogs will be deployed using funding available from the European Union. Subsequently, local Congolese dogs will be selected and trained, ensuring a sustainable unit with rapid response times that can expand as required.

“It is a very exciting time as we open our working dogs programme in Garamba National Park. We see enormous potential in the current approach employed by our Law Enforcement division and adding a tremendous detection capability, like that offered by working dogs, will be a key addition to the Park’s overall law enforcement strategy and ability to confront illegal wildlife trafficking. We are grateful for the support of the EU and Explorers Against Extinction in enabling this to take place.” John Barrett, General Manager of Garamba National Park

African Parks is a non-profit conservation organisation that takes on the complete responsibility for the rehabilitation and long-term management of national parks in partnership with governments and local communities. With the largest counter-poaching force and the most amount of area under protection for any one NGO in Africa, African Parks manages 15 national parks and protected areas in nine countries covering 10.5 million hectares in Benin, Central African Republic, Chad, the Democratic Republic of Congo, the Republic of Congo, Malawi, Mozambique, Rwanda and Zambia.

Garamba National Park, a UNESCO World Heritage site in the north-eastern corner of the Democratic Republic of Congo, is one of Africa’s oldest and most biologically significant national parks. Despite being situated in one of the most adverse parts of Africa, Garamba is teeming with life. Its rich ecosystem, spanning 5,100 km² and 14,800 km² for the Greater Garamba Complex, encompasses dense forest and savannah and is home to the largest population of elephants and the only surviving population of Kordofan giraffe in the DRC.

Over the past few decades, militant poachers and regional insecurities have placed immense pressure on the park and its resources. The result is a challenging combination of highly armed poachers and various militant groups, all of whom view the resources in Garamba as a way of financially supporting their initiatives, through ivory and bushmeat poaching.

Park Rangers are often the only stabilising force in the region and the only lifeline for both the wildlife and inhabitants. Through its partnership with the Congolese Wildlife Authority, ICCN, and under the management of African Parks, Garamba aims to restore security to the park through intensive and extensive law enforcement, and from community engagement in areas beyond the park's borders. The key focus is on training and equipping Park Rangers to counter militarised poachers, and to work with local communities to deliver needed benefits and reduce human impact on natural resources.

Explorers Against Extinction raised $50,000 USD for the working dogs programme in 2018. Trustees Rob & Sara shadowed the dog unit for a week in August 2019 seeing their work out in the field at check points and tracking in the national park. They stay in close contact with the unit and are delighted to see the positive impact they've already made.

You can read an article written by Sara for Travel Africa Magazine about the visit here.

Latico and Perla (very calm and diligent large, strong female Alsatian - she has that lovely Alsatian mixed brown/black colouring and a broad chest)

Adriko and Dano (these two work perfectly together - they're both a bit cheeky and Dano loves to play. Dano is a small male Alsatian with black colouring on his back and ears. The fur around his eyes is a rich brown - he looks like he's wearing goggles!)

Ayifa and Pax (Everyone loves Pax, a very exciteable short-haired German Pointer who stands out from the crowd - we saw Pax in action doing weapons searches)

Indogo and Rocky (Rocky is a Malinois - he is the smallest dog in the unit but makes up for lack of size with his stamina. He has a very black face and chest with brown legs.)

Kini and Qualla (Qualla is a beautiful and very recognisable female Malinois with very large pointed ears and a black face. She has a striking white flash on her chest)

Tandema and Hina (Hina's a Malinois with a warm brown colour all over her underside, chest and legs and a black muzzle.)

The dog unit is managed by Dom. Training is done by Invictus K9.