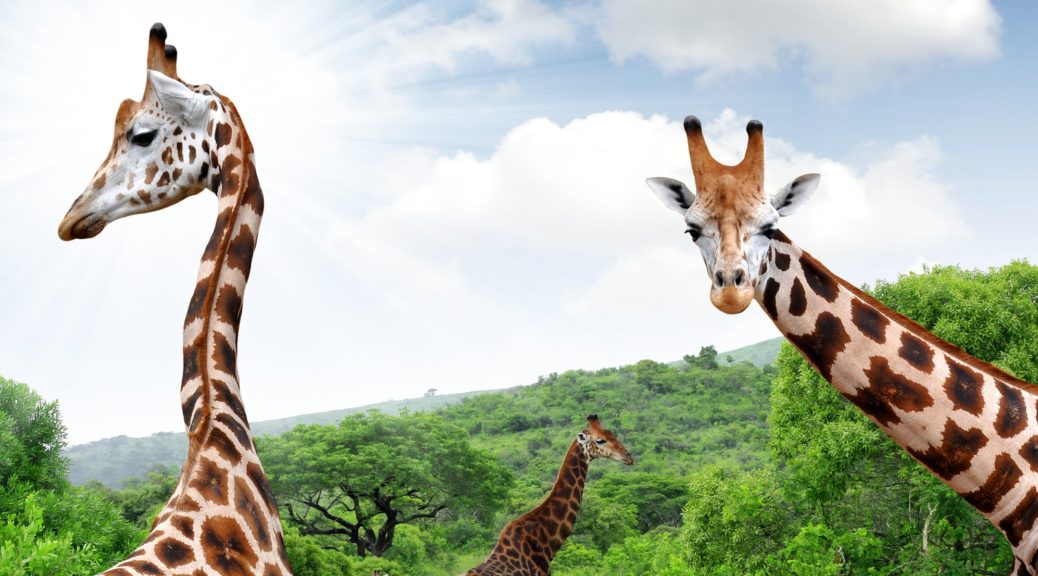 With their long eyelashes and graceful gait, giraffe are an iconic symbol of Africa. It is impossible to imagine an African
landscape without them.

However in recent years giraffe have seen a decline in numbers. Two sub species, Nubian and Kordofan, are listed as critically endangered by the IUCN Red List.

In 2018 our conservation campaign Explorers against Extinction supported a project in Garamba National Park, DRC.  Garamba is home to one of these giraffe sub species – the Kordofan giraffe. The working dogs programme we assisted African Parks to establish in Garamba is helping the rangers to protect not only elephant but also the Kordofan giraffe.

This year we are partnering with Giraffe Conservation Foundation (GCF),  the only NGO in the world that concentrates solely on the conservation and management of giraffe. Our aim is to raise awareness about the plight of giraffe while also directly contributing to the conservation of the Nubian giraffe.

We want to cover the cost of moving a pair of Nubian Giraffe from Murchison Falls to Pian Upe, Uganda. This pair will be part of a group of 15 or so giraffe making the move from Murchison Falls. It is hoped  the group will go on to establish a viable, free-ranging population. Find out more about this project here. 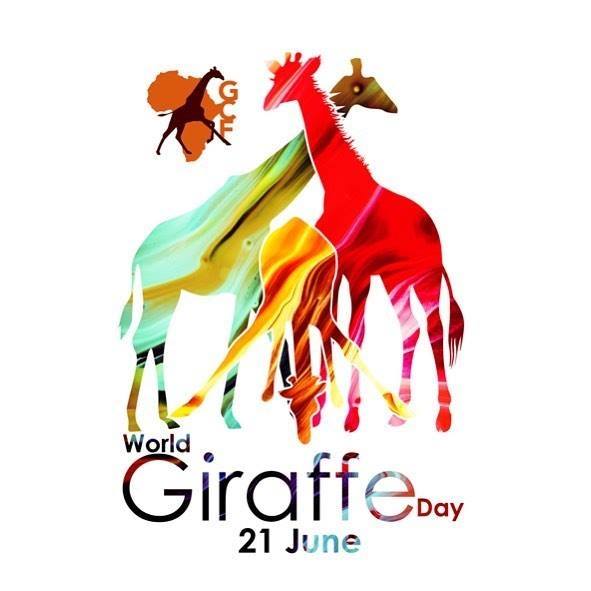 In the first of a two-part blog celebrating World Giraffe Day on Friday 21 June, we take a closer look at the different species and the threats facing them.

In the 1980s, the total number of giraffe in Africa was estimated at more than 155,000 individuals.

This is a drop by almost 30%. Unfortunately, in some areas traditionally regarded as prime giraffe habitat, numbers have dropped by 95% in the same period. 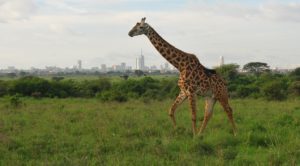 Many threats arise from direct, indirect or perceived competition for resources with humans, their livestock and agricultural land. Habitat degradation and destruction is caused by an increasing human demand for agricultural land, pastoralism, and uncontrolled timber and fuel-wood harvesting.

Human-giraffe conflict can develop due to crop loss and damage, and potential disease transmission can result from habitat sharing with domestic livestock. Sadly, giraffe outside protected areas are sometimes also struck by vehicles and trains.

The fragmentation and loss of giraffe habitat caused by human encroachment often leads to the isolation of giraffe populations which, in turn, limits the flow and exchange of genetic diversity between populations.

Although there is very little evidence of species interbreeding in the wild, the translocation of one species of giraffe to an area already occupied by a different species could create the risk of hybridisation. Should they interbreed, the genetic uniqueness of each individual species would be lost. 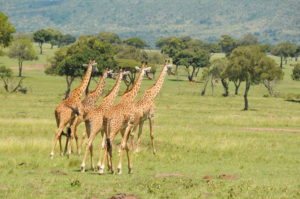 Giraffe occur in 21 countries in Africa. While the IUCN Red List currently recognises one species of giraffe and nine subspecies, new findings by GCF and partners clearly show four species and five confirmed subspecies of giraffe:

This updated species information is currently under further review and will hopefully soon be taken into consideration by the IUCN for future conservation assessments, giving each giraffe their own taxonomical status and mandate for increased conservation. 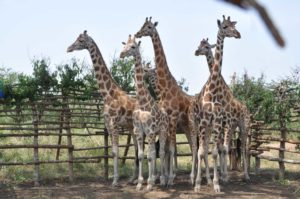 Based on the rate of decline, estimated at 95% in the last three decades, Nubian giraffe were, for the first time, added to the IUCN Red List and listed as Critically Endangered in 2018.

In 2010, the formerly known Rothschild’s subspecies was classified as Endangered and of high conservation importance on the IUCN Red List, but based on good conservation efforts of governments and partners, including GCF, the Rothschild’s giraffe was downlisted to Near Threatened as populations and numbers have increased. Once the IUCN recognises the two subspecies as one, the conservation status on the IUCN Red List for Nubian giraffe as a whole will most likely remain Critically Endangered, indicating an urgent need for increased conservation measures.

The Nubian giraffe’s patches are large, rectangular and chestnut-brown. The patches are surrounded by an off-white, creamy colour. There are no markings on their lower legs. 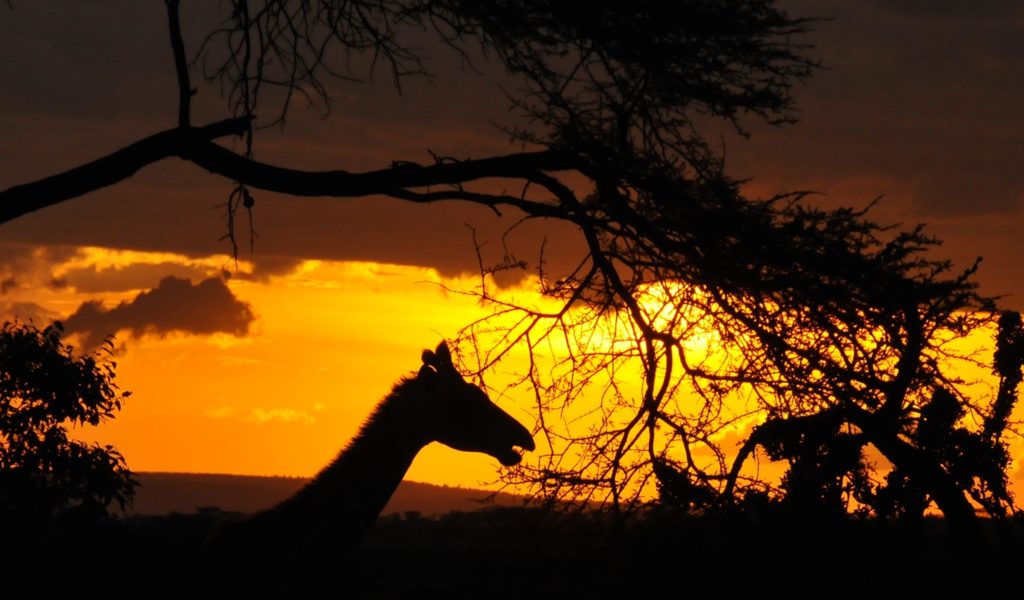 Giraffing Around: 4 species, 4 ways.
Some of the best places to see Giraffe.
1.See Reticulated Giraffe in Samburu, Kenya, one of Samburu’s ‘Special Five’ (Reticulated Giraffe, Beisa Oryx, Somali Ostrich, Gerenuk and Grevy’s Zebra). You’ll also find Samburu’s famous herds of elephants here, usually by the river. Of course, if you’re visiting Kenya and love giraffe, don’t miss a visit to the AFEW Giraffe Centre in Karen, Nairobi where you can learn about efforts to save another species – the Nubian (Rothschild’s Giraffe) where you can feed them from a special platform. Next door you’ll find the famous Giraffe Manor hotel – find out more here.
2.See beautiful Nubian Giraffe (Rothschild’s), a sub species of Northern Giraffe at Murchison Falls, in Uganda – this is a giraffe conservation hot spot with the population increasing eightfold over 20 years – a fabulous success story.
3.Southern Africa’s giraffe population has nearly doubled in the past 20 years thanks to concerted conservation efforts – Etosha in Namibia is one of the best places to observe Southern Giraffe alongside big cats, rhino and elephant.
4.See huge herds of Masai giraffe against a Serengeti sunset in Tanzania. The giraffe is Tanzania’s national animal and both Tarangire and the Serengeti offer excellent opportunity to observe them.
Part 2: How do you move a giraffe?  Q&A with Dr Sara Ferguson, Conservation Researcher, GCF